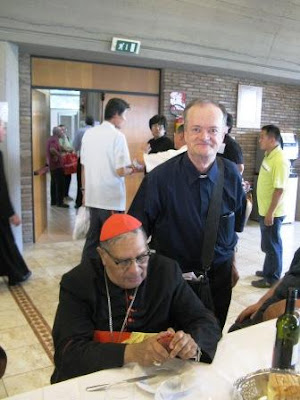 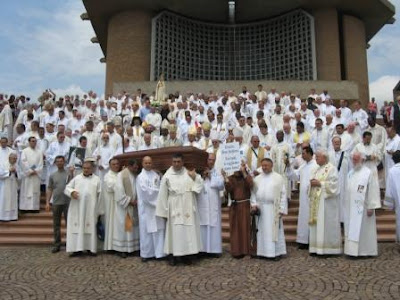 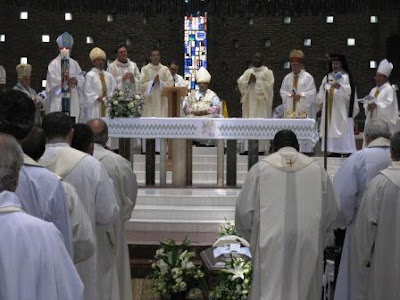 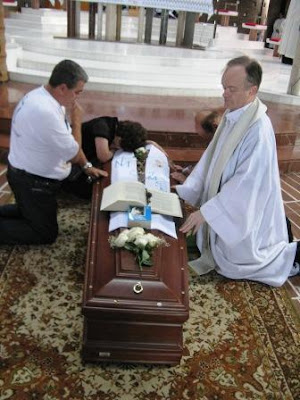 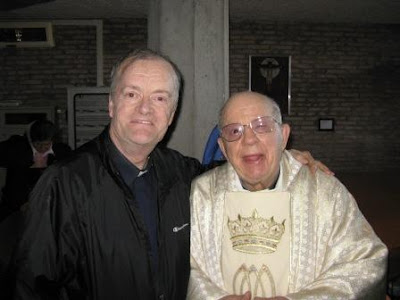 To see or download this picture at a higher quality with Don Stefano Gobbi and Father Joseph Dwight (March 24, 2011), go to:


To see the PHOTOGRAPHS of “The Life of Joseph Dwight”, go to:
http://picasaweb.google.it/josephdwight57/TheLifeOfJosephDwight .

Last year I participated in the spiritual exercises at Collevalenza will many of the bishops and priests and a cardinal of the Marian Movement of Priests with Father Stefano Gobbi, the founder of the movement. We were about 300 priests and about 30 bishops from around the world.

The following year on the 24th of March 2011 I participated in the regional Cenacle of Prayer at Collevalenza during which I concelebrated the Holy Mass with Father Gobbi and afterwards we exchanged a few words in the sacristy as well as a nice photo (above).

During the homily of Ivan Cardinal Dias, Prefect Emeritus of the Congregation for the Evangelization of Peoples, he said that every time Pope Benedict sees him, he always asks how is Father Gobbi. The cardinal also said during the homily that shortly before Cardinal Ratzinger was elected Pope that Cardinal Ratzinger said among the cardinals that we are living in the most difficult period in the history of the world and very few realize the gravity of the situation in the world and in the Church.

It is also interesting that Pope Benedict XVI wrote in the book "The Ratzinger Report" (1985): "One of the signs of our times is that the announcements of 'MARIAN APPARITIONS' ARE MULTIPLYING ALL OVER THE WORLD."

The day after the funeral Cardinal Dias communicated to us at Collevalenza by telephone that he saw Pope Benedict and told him of the death of Father Gobbi, the Pope said: “He went straight to heaven!”

Montfort writes in the Treatise on True Devotion (#49): "In the second coming of Jesus Christ, Mary must be known and openly revealed by the Holy Spirit so that Jesus may be known, loved and served through her."

“Montfort continues: "God wishes therefore to reveal Mary, his masterpiece, and make her more known in these latter times because she is the dawn which precedes and discloses the Sun of Justice Jesus Christ and therefore she must be known and acknowledged so that Jesus may be known and acknowledged. As she was the way by which Jesus first came to us, she will again be the way by which he will come to us the second time, though not in the same manner". (TD 50)

Montfort said: "Mary is the sure means, the direct and immaculate way to Jesus and the perfect guide to him, it is through her that souls who are to shine forth in sanctity must find him. He who finds Mary finds life, that is, Jesus Christ who is the way, the truth and the life. But no one can find Mary who does not look for her. No one can look for her who does not know her, for no one seeks or desires something unknown. Mary then must be better known than ever for the deeper understanding and the greater glory of the Blessed Trinity". (TD 50 #5)

Montfort "It is chiefly in reference to these last wicked persecutions of the devil, daily increasing until the advent of the reign of anti-Christ, that we should understand that first and well-known prophecy and curse of God uttered against the serpent in the garden of paradise. It is opportune to explain it here for the glory of the Blessed Virgin, the salvation of her children and the confusion of the devil: 'I will place enmities between you and the woman, between your race and her race; she will crush your head and you will lie in wait for her heel' (Gen. 3:15). God has established only one enmity - but it is an irreconcilable one - which will last and even go on increasing to the end of time. That enmity is between Mary, his worthy Mother, and the devil, between the children and the servants of the Blessed Virgin and the children and followers of Lucifer. Thus the most fearful enemy that God has set up against the devil is Mary, his holy Mother". (TD 51)

Montfort comments (TD 54): "...The slaves of Satan, the friends of the world - for they are all one and the same - have always persecuted and will persecute more than ever in the future those who belong to the Blessed Virgin, just as Cain of old persecuted his brother Abel, and Esau his brother Jacob. These are the types of the wicked and of the just".

"As apostles of the last times, you must follow Jesus along the road of disdain for the world and for yourselves, of humility, of prayer, o f poverty, o f silence, o f mortification, o f charity and o f a more profound union with God. You are unknown and despised by the world and by those who surround you; you are often obstructed, marginalized and persecuted, because this suffering is necessary for the fecundity o 'f your very mission". (451f; June 8, 1991)

Montfort: "...But Mary's power over the evil spirits will especially shine forth in the latter times, when Satan will lie in wait for her heel, that is, for her humble servants and her poor children whom she will rouse to fight against him. In the eyes of the world they will be little and poor and, like the heel, lowly in the eyes of all, down-trodden and crushed as is the heel by the other parts of the body. But in compensation for this they will be rich in God's graces, which will be abundantly bestowed on them by Mary. They will be great and exalted before God in holiness. They will be superior to all creatures by their great zeal and so strongly will they be supported by divine assistance that, in union with Mary, they will crush the head of Satan with their heel, that is, their humility, and bring victory to Jesus Christ" (TD 54).

“Here I would like to make clear a very important truth of our spiritual life: When the messages of Our Lady and therefore the prophecies of Montfort speak about little Apostles, the most worthless before the world and themselves, it does not mean that we are free from all sin: the difference is that we don't let pride overcome us, but we humbly run to Jesus, to Confession, we feel humiliated for having betrayed our consecration and we live a life of penance because we know we have been pardoned by Jesus and Mary, that we have nothing of our own and consequently, we find the strength of our apostolate solely in the strength of Jesus and Mary.”

Montfort concludes: "...They will perceive the splendors of this Queen and will consecrate themselves entirely to her service as subjects and slaves of love. They will experience her motherly kindness and affection for her children... They will love her tenderly and will appreciate how full of compassion she is and how much they stand in need of her help. They will have recourse to her as their advocate and mediatrix with Jesus Christ. They will see clearly that she is the safest, easiest, shortest and most perfect way of approaching Jesus and will surrender themselves to her, body and soul, without reserve in order to belong entirely to Jesus". (TD 55)

"The twelve stars also signify a new reality. indeed the Apocalypse sees me as a great sign in heaven: the Woman Clothed with the Sun who does battle with the Dragon and his powerful army of evil.”

“And so the stars about my head indicate those who consecrate themselves to my Immaculate Heart, who form part o f my victorious army, and who allow themselves to be guided by me in order to fight this battle and to attain in the end our greatest victory. Thus all my beloved ones and children consecrated to my Immaculate Heart, called to be today the (Apostles o f the last times, are the most luminous stars o f my royal crown”. ((#414j) Dic. 8, 1989)

“The gift of littleness is a special grace that the Father gives to those who He calls to fulfil His designs. These little ones are therefore privileged by You: they have the privilege to understand your design, to enter into this design, so that You might reveal it to them you reveal it to them only because they are little: “I thank thee, Father, Lord of heaven and earth, that thou hast hidden these things from the wise and understanding and revealed them to babes” (Mt 11:25).

“One can do many things, but without humility, there is nothing that remains for eternity.”

“The woman clothed with sun appears next to the dragon. The dragon forms his army array with the most powerful, the strongest, the greatest, the most wise, with those who have the highest places. He despises the last ones because they are not worth anything. He values the first ones, the strongest, because he believes he will win with this stronger army array – strong and intelligent spirit, but proud.”

“Behold why Our Lady goes in search of these little ones privileged by the Father. If you do not have the grace from the Father to become small: “Yes Father, for such was thy gracious will to open your kingdom to the little ones”. If you are not these little ones to which the Heavenly Father reveals Himself showing His kindness, you are not sought out by Our Lady, because She, little, in order to win the battle, forms her battle array with the smallest ones. If one is not small, he does not understand the Movement at all.”

“Behold, the condition to be part of the battle array of Mary: to be small. If you do not want to ever enter into crisis: be small. Do you want to go forward in the midst of many difficulties? Be small.”

“And so the stars around my head indicate those who consecrate themselves to my Immaculate Heart; they are part of my victorious battle array; they allow themselves to be guided by Me in order to fight in this battle and in order to obtain in the end our greatest victory.”

One can find further information at the Marian Movement of Priests website: http://www.mmp-usa.net/main.html.

this is such an interesting read. i am happy to be able to read it. it is true that the real food that matters is the food for the soul. it is not an easy road but surely a pesant one. i will be reading more from you, please keep updating

Thank you Father, this article made me joy and it's really my best today's manna :)