The Abomination of Desolation

The Abomination of Desolation


Dear friends,
On April 23, 2018, when attempting to make a new post in a Facebook group, for the first time ever, suddenly while posting, I received the following message:
Action Blocked
- You're temporarily restricted from joining and posting to groups that you do not manage until Thursday at 12:39am. (which is exactly 3 days later)
- If you think you're seeing this by mistake, please let us know.


Recently the same thing happened to a friend of mine, after trying to join a group supporting baby Alfie Evans. I have discovered that this temporary restriction also happens when you do not join certain groups in which you are invited by certain “friends” which you subsequently “unfriend”. This same strategy is used internationally by giving money (stolen from us in an underhanded ways – banks, printing money, inflation, deflation, etc.) to groups that promote the culture of death and obstructing, in many ways, the groups that promote the culture of life. As the New World Order becomes more and more heavy handed, their techniques will become more and more out in the open and dictatorial. When they finally arrive to the final stage, the NWO will make Hitler’s dictatorship seem like a picnic, foretold by Christ (Mt 24:21)!


Were the saints politically correct as are many religious leaders today? Did the saints take the great risk to seek to warn the sheep of the hidden powerful traps of the wolf, in their particular time and history, that leads a great number of souls to eternal destruction? Were the saints “ALL DUMB DOGS, THAT CANNOT BARK” (Is 56:10) like so many priests and bishops today?!? Why were most of the prophets of the Old Testament killed, along with our Savior Jesus Christ? How many people or groups or religious congregations today do as the saints, or as a courageous nun like Mother Angelica (1923 – 2016) who was ready to lose even her television network, EWTN, so as not to betray or compromise the Eternal Truth, Jesus Christ (Jn 14:6), so as to maintain the proper priorities, in particular, the salvation of souls?!? Just as all the saints, Mother Angelica was not attached to the glory before men (Lk 16:15; 6:26; Jn 5:44; 12,39-43; Mt 6:1-6. 16-18)! “Martyrdom is a witness which all Christians must be willing to make” – Pope John Paul II.


Before “the man of lawlessness is revealed, the son of perdition … only he who now restrains it will do so until he is out of the way. And then the lawless one will be revealed…” (2Thess 2:3-8). Above all what is “RESTRAINING” the “man of lawlessness” is the presence of Jesus Christ as the Truth (Jn 14:6) and especially His real presence in the Most Holy Eucharist of the Holy Sacrifice of the Mass; Satan seeks to trivialize both so as to deprive us of God’s guidance and His powerful protection and help. Before the manifestation of the Antichrist, “the continual burnt offering” (Dan 8:11; 12:11), will be taken away, and the “sacrifice and offering” will cease (Dan 9:27), which Jesus foretold (Mt 24:15). This sacrilege is the ultimate “ABOMINATION OF DESOLATION” (Mt 24:15; Mk 13:14; 2Thess 2:3-4; Dan 9:27; 11:31; 12:11)!


Dear friends, I was hoping to talk about these serous things more gradually. “Satan disguises himself as an angel of light” (2Cor 11:14). “Be wise as serpents and innocent as doves” (Mt 10:16).
This deception, this lose of the Eucharist, “the source and summit of the Christian life” (Vat. II: LG 11; CCC 1324), is being done slowly and in such a way that as few Catholics as possible will realize the lose of our greatest treasure and strength on earth, the real sacramental presence of Jesus Christ. The focus of attention has been intentionally shifted from adoration of God to man as the center of the Liturgy. Even fewer Catholics know the four conditions necessary for a valid Mass. None of this could happen if the priests and bishops of the Catholic Church would obey the Liturgical Books of the Catholic Church; Pope John Paul II and Pope Benedict ordered the founders of the Neocatecumenal Way to obey the Liturgical Books but they refused obey (http://spir-food.blogspot.it/2015/02/the-neocatecumenal-mass.html).
“The Sacrifice of the Mass renews that which was accomplished by Jesus on Calvary. By accepting the Protestant doctrine, people will hold that the Mass is not a sacrifice but only a sacred meal, that is to say, a remembrance of that which Jesus did at his Last Supper. And thus, the celebration of Holy Mass will be suppressed. In this abolition of the daily Sacrifice consists THE HORRIBLE SACRILEGE accomplished by the Antichrist, which will last about three and a half years, namely, one thousand two hundred and ninety days” (December 31, 1992; “To The Priests Our Lady’s Beloved Sons”; http://our-lady-priests.blogspot.it/).
Saint Padre Pio said: "It would be easier for the world to survive without the sun than to do so without the HOLY MASS." This saint also said: “The ROSARY is the weapon for these times”! Stay close to the Sacraments and pass as much time as possible praying the Holy Rosary before the Most Blessed Sacrament while our Eucharistic Lord is still in the tabernacles of our public churches!


Up to now, I have succeeded in defending myself from hackers entering into my computer. If I am blocked again on Facebook, perhaps for even a longer period of time or even indefinitely, and you do not hear from me and I do not respond to your comments, and you would like to communicate with me or see other articles of mine, go to one of my websites and you will find at least one of my email addresses. If you cannot find one of my websites, you might try putting into Google a few of the following key words: josephdwight, joseph-dwight-index, giuseppedwight, giuseppe-dwight-indice, Father Joseph Dwight, Don Jo (Joseph) Dwight.


All things are possible if we trust Jesus through Mary. We must stay very close to Jesus in the Sacraments and in Eucharistic adoration with Mary’s Holy Rosary in hand. In this way we will become habituated to looking at Jesus through Mary so as to even be able to gratefully embrace the gift of martyrdom (Rev 7:9-17) or to even walk on water, as did Peter (Mt 14:22-33), rather than sinking into the high waves by looking at ourselves or at the great spiritual and temporal storm in the next few years!


In this period of the “great tribulation” (Mt 24:21), “the Church will enter the glory of the kingdom only through this final Passover, when she will follow her Lord in his death and Resurrection” (CCC 677). But “IN THE END MY IMMACULATE HEART WILL TRIUMPH!” - Our Lady of Fatima, Portugal, 1917. There will be fulfilled the Protoevangelium (Gen 3:15) – Saint Louis de Montfort!


In the mean time, perhaps you might find this article interesting:
Courage In This Great Final Battle
http://spir-food.blogspot.it/2016/11/courage-final-battle.html


There is less prayer than ever before, more sin than ever before, even worse, indifference as if sin no longer exists, and so we have given much greater power to “the father of lies”, Satan (Jn 8:44). In particular Satan has more power to “disguise himself as an angel of light” (2Cor 11:14), to offer his very deadly beautiful lies as if they were the “truth that sets us free” (Jn 8:32)!
Thus it is very important in these times of great confusion, when even Catholic bishops are no longer in agreement about the fundamentals of our faith and morals, to not only pray much and to study the Catechism of the Catholic Church for adults, but to keep our eyes open so as not to fall into the beautiful lies of Satan presented as if they were the Truth!
FOR UPDATES on some of these fundamental, hidden, and disguised deceptions of the ancient serpent, visit one of my index web sites to see the more important, latest articles:
(as well as the DOCUMENTS REGARDING ECCLESIAL APPROVAL of the TESTIMONY OF GLORIA POLO):
http://josephdwight.blogspot.com
https://josephdwight.wordpress.com/2015/09/21/joseph-dwight-index/
https://www.scribd.com/doc/282239978/Joseph-Dwight-Index 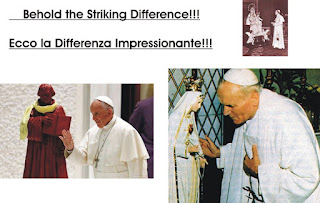